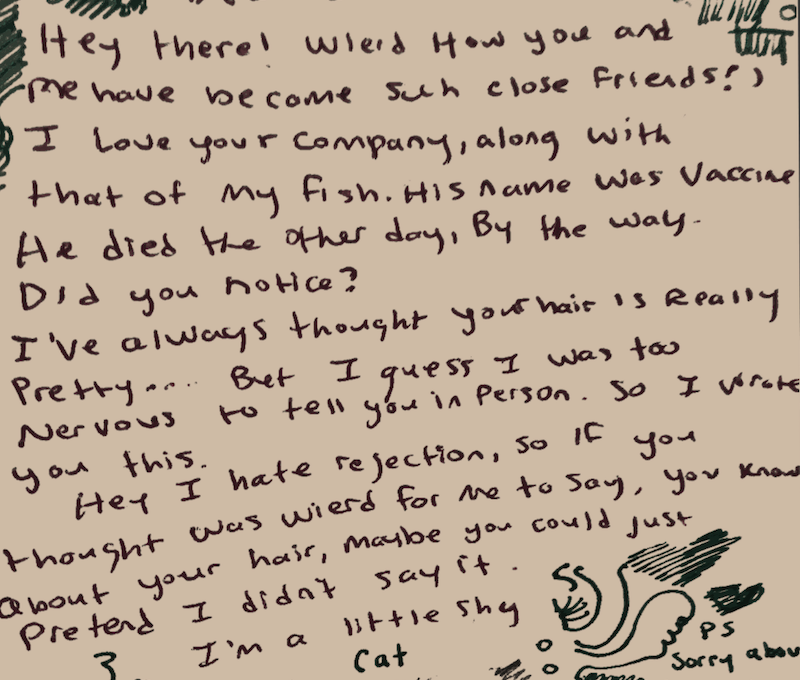 Pen and ink do it: Three American students combat loneliness in the only possible way there is, solidarity. Their idea is as simple as good: writing the longest letter ever written to loneliness. You can help.

Covid-19 lockdown measures may have eased – but loneliness hasn’t. To be honest: This invisible pandemic has been there long before. And it is still rising. Attacking our immune system, chronic loneliness is said to raise the risk of dying earlier (Holt-Lunstad, 2015). Over 9 million people across all ages alone in the UK are lonely, sometimes or always. All around the globe, people co-operate to fight loneliness. One of them is Jessica Lao, student at Harvard University in Boston, USA.

Together with two fellow students, Jessica decided to start Dear Loneliness, a “crowdsourced art exhibit, research study, and archival effort”. I spoke to her about this special letter project.

Jessica, what is the origin of your Dear Loneliness Project?

My teammate and classmate Carissa Chen actually first came up with an idea to collect psychology statistics on loneliness via a pen pal program back in January. It was the seed for that was a desire to match up her immigrant mother with people in similar situations. After COVID-19 set in, we realized that there are actually a lot of pen pal organizations doing great work – shoutout to our partner 1 Lettre 1 Sourire, based in France! We chose to take a more artistic route. My sister and I also just started a literary magazine called EX/POST this summer, and we felt so guilty about having to reject submissions that were often by our friends or big supporters of the mag. We wanted to pursue a more collaborative and inclusive art project like Dear Loneliness.

How are the reactions so far? How many letters to loneliness have arrived by now?

We’re really grateful for the encouragement we’ve gotten from people around the world! As dark as these times are, I’m stunned by the grace that humanity still holds and which I’ve seen so much of first-hand through Dear Loneliness, be it a thoughtful letter or a forgiving response when our small team of three responds too late to an email. I’m also shocked by the number of letters we have right now – currently 35,000+. This would not have been possible without amazing partners like 1 Lettre 1 Sourire and the Harvard Economics Review. I guess that ties into the reaction question too, because we’ve received so much support from our professors and other adults in the world of design. We’re so grateful to be pursuing this project with the support of people with exhibit experience.

Who are the letter writers?

They’re all over the place in the best way.

Letters have come quite literally from all over the world, and you can see an array of the countries here! My gut says that the age range is leaning toward either the very young or very old, which are the groups traditionally most affected by loneliness, but I’ll have to analyze the data later.

How did you three find together?

The original psych statistics + pen pal Carissa mentioned happened a few months ago. But we revived the idea after quarantine set in and we were home over the summer. Sarah and I are sisters, and I work with Carissa in a nonprofit for girls’ education called Circle of Women, as well as the Harvard Economics Review.

Which were or are your own experiences with isolation? Is it a topic during your study years as well?

Honestly, running this project has given me a lot of perspective on my own experiences with isolation – while all of us on the team have had some issues with loneliness due to switching schools, the immigrant experience, etc. I think my issues pale in comparison to some of the letters that come in. One of my greatest regrets, actually, is that we can’t do more for the people who send us letters about their loneliness. We try to counsel the ones we can over email or send them to our partner organizations’ resources. I actually don’t study psychology, so I’m very wary of prescribing anything unsupported to our audience.

Is there some kind of common matter in the letters? Some pattern characterizing loneliness?

Haha, I need a better grasp of statistics to answer that question correctly. But I know that early on, we ran frequency analyses of the words in the letters. We thought it was so interesting that some of the most common words behind “lonely” were “time” and negative words like “didn’t.” I’m not sure if that’s the case now, but certainly something to think about…

On writing and loneliness: How would do you describe the meaning of this special pair?
Which was your motivation to connect these two entities?

Writing is a passion of all three of us on the team, and it’s something we hoped would be accessible for most people as a means of communication. Even so, we didn’t want to artificially limit our (surprisingly international) audience, so we’re allowing submissions in other media, like art and video.

Do you stay in touch with the persons who send letters?

We ask submitters to give us as much information about themselves as they feel comfortable. So we do have the email addresses of some of them in case we ever want to reach out about new developments in the project. There are unfortunately too many letters now to keep in touch with everyone. But we try to reach everyone in our inbox eventually because they deserve a human voice and connection!

Thanks a lot, Jessica! I wish you a long Dear Loneliness letter!

More articles on writing at The Bartleby:

0 comments on “Interview | Feeling lonesome? Write a letter to loneliness – and support this important project!”